Having a bonsai tree in your care is a task both rewarding and tiring, though the former outweighs the latter in the long run. Despite being time-consuming and a bit of a hassle, nurturing a bonsai plant can add the tranquility element to your home that cannot be obtained through another living plant. As you pour out your heart and time to the plant, the bonsai returns the favor with beautiful and breath-taking leaves. In that regard however, the Azalea bonsai is agreed by many to beat the rest.

Falling under the rhododendron genus, Azalea is better known as the native inhabitant of Japanese mountains. To be more specific, the rhododendron indica is from the section of Tsutsusi that is derived from the Japanese name Kirishima-tsutsuji. This flowery plant is from the family of Ericaceae, which makes up a majority of the rhododendron genus. Azalea has many species and sub-species, and each of them requires different nurturing methods that may vary in terms of feeding, potting and pruning. The most popular selection of this particular bonsai tree however is the Satsuki Azalea, known for its prolific amount of beautifully-colored flowers when in full bloom. Satsuki Azalea is also one of the bonsai trees that bear a diverse range of flower forms with multiple color patterns from a single plant.

Although most of the Azalea bonsai that are decorating Japanese gardens today originally came from China, they are more treasured and highly regarded by the Japanese, who were responsible in hybridizing them for more than 500 years now. The growth of Azalea as a bonsai tree has been recorded for centuries, and their varying flower patterns were already recorded and codified as early as 1692, through the book Kinshu Makura or better known as A Brocade Pillow. According to the predecessors of the art that is bonsai and its care-taking, the Azalea we have today is the natural hybrid between the Rhododendron indicum and Rhododendron tamurae.

In the west, the Kurume Azaleas are particularly popular and regarded as a favorite among the gardeners there, and this hybridized Azalea is only one of the many that originated from Japan. The country of the rising sun has always been aware of the majestic symbol that this potted flower represents, and it shows in the famous rendition of what is probably the biggest known appreciators of this plant; one of the classical gardens of the 17th century that belonged to the Shogun of the time housed a heaven-like two-tiered clipped tapestry hedge consisting of a wide array of colorful Azaleas. The imperial villa at Shugakuin was truly a sight to behold with its hillside featuring a 30-feet band of these beautiful trees. 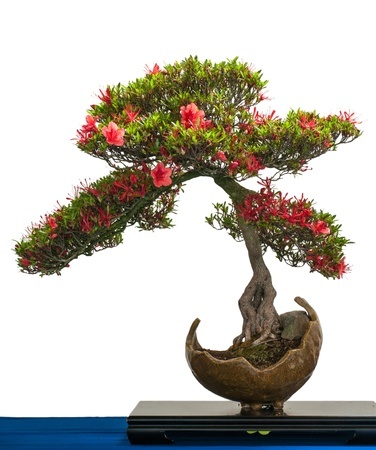 As you might know, the bonsai tree is a miniature potted plant that relies solely on your care in order to grow and blossom healthily. Some people would agree that taking care of a bonsai plant would border between a hassle and a skillful artistic technique. Caring for this delicate, miniature plant also differs according to the species of the bonsai that you are growing. The usual care of a bonsai tree involves watering, fertilizing and pruning. Some of the species may even require an annual potting of the tree, so the need for a proper schedule is more than justified when it comes to this beautiful potted plant. Taking care of an Azalea bonsai would require even more attention and time from its owner.

Your tree would need enough water especially during the growth period that is in spring, as well as the following two months. In addition to that, the plant would need to be adequately watered during the dry season, specifically to provide the sub soil below the root system with enough water in order to prevent the soil salts from moving to the root area.

Your watering schedule for your tree can differ according to certain circumstances. If the plant receives full sun, then it needs to be watered once a day. The goal is to never, ever let the soil get completely dried. However, you should also factor in the size of the pot as well as the type of the soil. Evaluate these conditions and cater the watering schedule according to these factors. Until you are fully used to these conditions and their requirements, it would be a good idea to use a moisture meter to keep the plant at the optimum moisture level. Like most other bonsai plants, watering must be done either with a watering can or a hose that provides water in a gentle manner as to not disturb the soil. Apply water until it starts to flow out the holes at the bottom of the pot. If you place your plant outdoor, then a good rain would be enough watering for a while.

One common factor that kills a bonsai plant is over-feeding, which remains true for the Azalea. Generally, this bonsai tree enjoys an organic fertilizer administered once a month. The acid in the soil would be good for the growth of the tree. An important reminder that owners should take note of is that no fertilizer should be given to the plant during the growing period. The aim here is to provide the little soil which the plant is growing in with sufficient nutrients periodically.

You can also use liquid fertilizer for your plant, though most experts recommend using them at half of the suggested strength. During spring, fertilize the plant every other week and be sure to stop once the flowering period is over. Failure to comply may result in the loss of flowers and flower buds at the price of better leaf growth. To ensure your Azalea bonsai to set buds and blossom for the next season, a tricky feeding regime must be applied during late summer or early fall. During these times, reduce the nitrogen content from the fertilizer mixture and instead increase the amounts of phosphorus and potassium.

Generally, an Azalea bonsai can survive in a spot that is above the temperature of -5° C or 41° F. This plant particularly thrives in a sunny location, and finds frost a distressing and growth-hindering environment. If your plant is dormant, its location must be protected, and the rims of the pot mulched. If your prefer keeping the tree indoors, then make sure that it is located at a cool window with plenty of light, especially during winter. This is to meet its requirement of frequent misting as well as high humidity. Note that in its dormant state, the plant does not need sunlight, and watering can be reduced to as much as only once every two weeks. If you do choose to keep it indoors, be prepared to shower it with more attention and love, and have its temperature requirements met.

Changing the pot of the plant can help your tree to mature and grow even better. Re-potting however, is a delicate process and must be done with the utmost care. Changing the plant’s pot is highly necessary when the root system has filled the entire pot. In that sense, a young Azalea bonsai must be changed into another pot once a year, and as it matures, this requirement is reduced to once every two to three years. The main objective of re-potting is to supply the plant with fresh soil as well as to encourage an even more compact root system.

When changing the plant’s pot, be sure to trim the root balls and tease out any woody sections. Do this by cutting a cone shape into the root ball, and make sure to extend it all the way to the bottom of the trunk. This area is where the roots are the thickest, and it must be removed in order to prevent rot which is caused by lack of air or poor drainage. Azalea bonsai owners usually re-pot their plants either right before flowering or right afterwards. If you choose to do it before, then be sure to remove flower buds to avoid straining the plant. This is because the flowers take an incredible amount of energy from the tree, so make sure to remove all the flowers, both old and new, as well as the remaining buds all at the same time. If you notice the plant bearing flowers a little too soon in spring, remove two or three of the biggest buds before they reach a full blossom, which will slow the development by a little bit.

After you are done re-potting your tree, it would need some time to recuperate and regain its strength. Allow the plant to re-establish itself by letting it rest in the shade for a few weeks. One of the ways to keep the plant in its miniature form is by potting it back in the same pot as before. If your plant is still in its early years, be sure to examine its root system every year to see if the roots have fully filled the pot.

Most bonsai trees are already trained prior to acquisition or purchase, so be sure to inquire about this when getting one. If it has not been pruned, and you are not yet used to doing it yourself, it would be better to learn from an expert. Generally, pruning is done after its flowering period. The species’ brittle branches and tender bark are suitable for use with aluminum wire, which is softer and works better than its copper variation. You can also use plastic tape or raffia to protect the more sensitive barks. Make sure to always perform clean cuts using sharp tools and seal large wounds with Lac Balsam or other sealants immediately.

To begin pruning, remove all dead flowers at the flower’s base in order to prevent the forming of seed pods that will encourage new leaves. Since the Azalea has very brittle branches, it would be best to allow the tree to dry out for a week before attempting major and heavy bending. Remove any faulty branches and allow light to reach the ‘inside’ of the foliage mass. This would in turn prompt back-budding in the plant. Some owners believe that it would be best to reduce the number of new shoots at the tip of the branch to just two. Ensuring that each branch divides into only two smaller parts will help balance the vitality of the branches, aside from avoiding ugly, inverse tapers from developing.

Azalea bonsai responds well to hard pruning, and even if you prune the tree back to a stump after flowering, it will bud-back prolifically and can later be styled into any bonsai design that you wish. The distinct trunk allows for a variety of styles, like the root-over-rock, the wind-swept, the slanting, the semi-cascade as well as the informal upright. All these looks would be suitable with both twin and multiple-trunk bonsai trees.

Aside from the mentioned care-tips, the Azalea is also susceptible to insect attacks, as well as to rabbits and other munching mammals. Do not however, spray the tree or open flowers with insecticides or fungicides, as these chemicals will cause the flowers and leaves to wilt and fall. Most owners usually spray a mixture of one tablespoon of dish soap with a quarter of warm water until the solution runs off the leaves. Then rinse well with water. Repeat this step as often as required. Good luck with your tree!