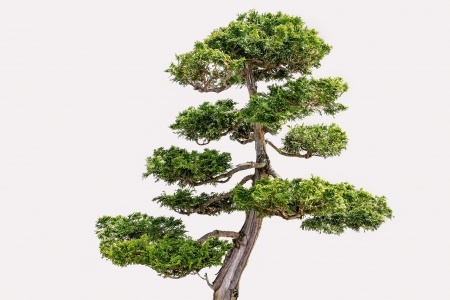 The official name of the dwarf hinoki cypress is Chamaecyparis obtusa. It belongs to the family of Chamaecyparis, which identifies seven particular types of coniferous trees that are native to Japan and North America. All of these species share several common characteristics, which include:

–    Scales of the branches overlapping

–    A reddish bark that darkens with age

This particular genus of conifer is a well-known tree as it is among the smallest types of cypress trees, making it fit choice for bonsai growers, but its maintenance is a bit of a challenge for those inexperienced growers. When properly trained this Japanese cypress reaches up to 12 inches of height, however, in its natural surrounding it can grow to be tall as much as 75 feet.  The hinoki cypress is also known as the golden hinoki. We can assume that the name “golden” was originally hidden in the Japanese “hinoki” which means ‘fire tree’. This type of tree was used to start a fire with friction, and this tradition is nurtured even today in some Shinto Shrines.

The dwarf cypress is very slow in growing and it has very characteristic tiny fans of foliage that are golden, and that develop on a common irregularly shaped bush. They are ideal for gardening décor in a combination of a rockery because they grow from small to medium sized bonsai.

When it comes to nursing and maintenance, several factors are important to be taken into consideration so your dwarf hinoki cypress bonsai tree would grow strong and healthy. One of the advantages of this tree is that it can grow well even in extremely cold weather, but it is advisable to protect the trunk if the temperature goes significantly below zero. If you decide to take your tree, indoors keep it away from any heat sources and place it next to a bright window. By springtime remember to take your potted bonsai back outside as it requires full sun and fresh air. When it comes to watering, this particular type of hinoki bonsai requires careful maintenance. The key lies in balanced watering, as it can never be allowed to dry out, but, on the other hand, high moist levels can cause rot rotting and the entire tree could die. Water the tree daily, but always check the level of moisture in the rooting system before you do it. Fertilize it with an acidic food every two weeks during the mild seasons, except winter.

The dense rooting system implies that this hinoki cypress bonsai can be grown with simple air-layering. This would allow better control as well as growing young trees from the branches of the original. The method requires careful peeling of the bark, moisturized moss, and tight airbags that would cover the “naked” part of the trunk, through which a new rooting system can be developed. This technique is very effective since it requires a simple saw removal of the branch from the mother tree in an individual pot.

This airlayering technique should always be performed during spring. There are different techniques, and the one described below is one way on how to develop a start of a rooting system from the bark and off any upper section of the original tree.