Cedar bonsai is grown from green coniferous trees that are predominant in in the Western part of the Himalayas and Mediterranean. With four known species, cedar trees are easily identified by its needle thin leaves that grow in clusters on its branches. Usually identified with tough and cragged bark, this tree easily catches the attention of bonsai enthusiast because of its one of a kind beauty and charm. 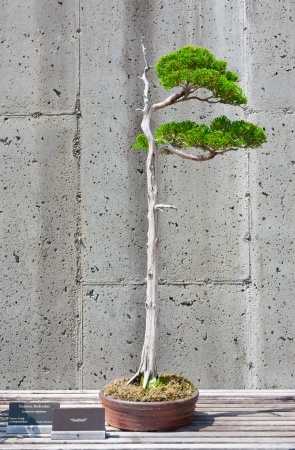 Cedars are trees growing from medium to large sizes with physical features intermediate between a Larch and a Pine. Some varieties of Junipers are now considered to be cedars since they are exhibiting common physiognomies. Characterized by lavish green, needle-like leaves, the tree species are also known for their aromatic woods which has been used in the ancient times to make clothing cabinets and chests.

The genus contains four equally stunning species, all of which has its own unique characteristics:

Japanese Cedar – Cryptomeria japonica, more commonly known as Japanese Cedar, got its name from the country where it is predominantly found. It can grow up to 50 meters high with an enormous girth of 10 meters. It has a reddish brown black bark that grows on strips with bluish green to green foliage. Just like other trees in this species, the Japanese ones bear both male and female cones. A unique characteristic of this species is the fact that the color of its leaves changes from green to bronze during winter.

Eastern Red Cedar – This species (Juniperus virginiana) originally belongs to Junipers but has long been considered as a cedar due to its prominent features. They are natives to Eastern North America but originated from south eastern Canada. Eastern Reds are usually slow growing trees with a bunch of thin, dense leaves and bears dark purple seed cones coated with a waxy white substance.

Cedar of Lebanon – This variety commonly grows in Lebanon (Cedrus libani) after which it was named. Its trunk is usually wrapped with black and brown scaly bark with randomly patterned ridges. Its thin and delicate leaves grow abundantly creating a magnificent 4-sided view of the tree. The species is so famous that it has become Lebanon’s national emblem and part of the Lebanese flag.

Cedar Elm – Ulmus crassifolia is the scientific name of the Cedar Elm which is native to the South Central American states. This variety can grow as a large deciduous tree with relatively small and thin leaves. During winter, these leaves fall while during summer, its flowers are naturally pollinated with the help of wind.

These bonsai trees are not only rare but delicate as well. It is recommended to place them in a sunny area due its great demand for sunlight. Sufficient sunlight allows the bonsai to produce rich colored leaves and denser canopies. However, extreme caution must be exercised with regards to the location of the plant as they are more delicate compared to others. Skinny and sparse plants mean that they have been overexposed to sunlight while pale leaves is an indication of sunlight scarcity. In order to avoid thin trunks, it is recommended to plant them in soil first before transferring to pots.

Watering and Soil – In takes constant monitoring of the soil of you plant when watering it. Cedar bonsai likes just enough amount of water to live. Excessive water on your plant makes its roots mushy and turns the leaves yellow. However, too much dry soil will weaken the plant making its leaves vulnerable and can falls off easily. In order to optimize the plant’s growth, it is always a good practice to add a portion of organic substances to the soil to make it more conducive for growth.

Pruning and Contour – Pruning is easily done on these trees. By simply pinching the new, green branches sprouting, you can already avoid unwanted growth. Wiring the bonsai to achieve a perfect contour needs more patience. Since it usually takes a while before they respond to wiring, cedars are usually left wired for 12 to 24 months. Scars from wiring are permanent and must be taken into consideration before the wiring process. Though a certain contour of a bonsai may look good, these trees display their natural beauty in an upright position with its skinny leaves gracefully draping from top to its base.