The Larch bonsai, also known as Larix bonsai, are very popular and best known for their thick trunks that grow very quickly, and their stunning foliage coloring, that varies widely from one season to another. The genus is called Larix, part of Pinaceae Family, and is formed by a number of approximately 10 species of monoecious coniferous trees, two of the most common being the European Larch (Larix decidua) and the Japanese Larch (Larix kaempferi). 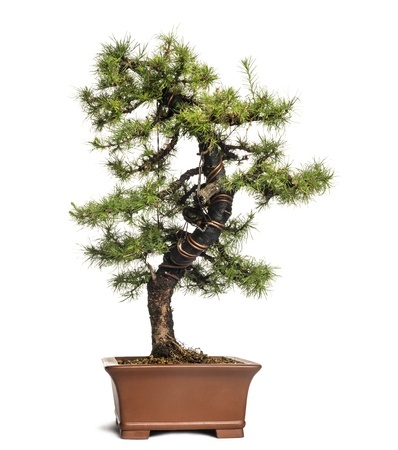 Unlike most other conifers, larch trees are somewhat unusual because they are deciduous, and not evergreen. They are native from countries in Northern hemisphere, mostly US, Europe or Canada, but depending on the specie.

The Larix bonsai have a very green young foliage that ends up in a brilliant golden yellow color in fall. The leaves are in the form of needles and stick to the branches in loose spirals and whorls. They kind of resemble a brush.

They have purple small cones appearing in spring time, that turn brown when maturing, and what’s interesting is that they stay on the tree for quite a few years before they drop off the branches.

How to care for your Larch Bonsai

Positioning – The Larch grows well if placed in a sunny or semi-shaded position. They are hardy trees, and don’t need to be protected in the winter, as they can resist to temperatures as low as -20 degrees Celsius. If allowed to stay in the sun, its needle-like leaves will grow longer, while if it grows in a cooler climate, the needles will be much shorter and slightly darker in color.

Soil, Fertilizing and Watering – If you keep your larch bonsai outside during the summer, and in full sun, remember that it will need more water than if kept in shade. Just keep the soil moist, but do not over-water. You can use rainwater if the water in your area is hard. The foliage can be misted at times.

The soil needs to be well fertilized with nitrogen enriched food in spring, before the fresh buds appear, and then you can balance it off from summer onwards, so the bonsai can get strong enough for the winter period.

Pests and diseases: Aphids, caterpillars, scale insects and bark beetles are some of the most common insects that can cause harm to your larch bonsai. The “mysterious wilting disease” is almost always fatal to larch. Because systemic treatments don’t always work, it is highly recommended that you keep your tree in good health condition along the way, like watering, feeding, proper temperature and so on, so that it is less likely to contact diseases. As we know, prevention is better than cure.

How to train and style your Larix

Styling The Larch bonsai can basically be styled in any way, except for the broom style.

Wiring – The best time to wire larches is in spring, when the branches are not yet covered with foliage. The branches get thick very fast, so you would want to check regularly that the wires don’t cut into the bark. Wire between the buds and make sure not to harm them. You can wire old branches as well, but preferably use guy wires, and you might have to wire them repeatedly before they keep the new shape and direction.

Pruning – It shouldn’t be done in the first year of growth, after which significant pruning needs to be done each year in late winter or early spring, just before the buds break into small fresh green sprouts. Because they grow very fats and new branches grow significantly in a matter of weeks, you can regularly prune it throughout the year.

Repotting: You need to repot yearly, but that generally depends on how old your bonsai is. If it’s younger and still growing at a rapid pace, you can even repot twice in one year, and if it has slowed down in growing and matured, once per year or even less will be fine. But make sure you don’t prune the roots too much, larches don’t really like you to disturb their root area.

Larix decidua, or the European Larch, has its origins, as the name says, in Europe, while Larix Kaempferi or the Japanese Larch is native from Japan. You can differentiate them by their crowns. While they are both broad and rich, The European Larch’s branches grow narrowly upwards at first and start dropping down after reaching great heights of 50 meters or so, while the Japanese Larch spreads its branches in a more or less horizontal way, as their natural growth pattern. These two main species can be very easily differentiated as well by the color of their sprouts in winter time: Larix Decidua has yellow colored twigs, while Larix Kaempferi’s color is more of a rusty red. A hybrid of these two species is Larix Eurolepsis, or Dunkeld Larch, which has characteristics of both.

Larix Laricina, also known as the Tamarack bonsai or the American Larch, is a little bit different form the others in that is smaller, but more durable, and the color of its bark is pink-brown. It makes beautiful small red flowers that are spread all over its crown and give it a spectacular appearance.